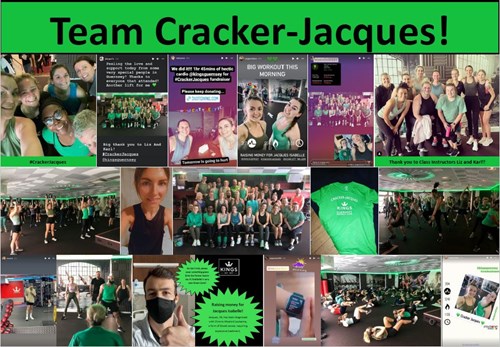 We want to say a huge thank you to Team Cracker-Jacques and all our members who have shown their support for Jacques Isabelle since his leukemia diagnosis.
At the heart of this was our special one-off fundraising class ‘Cracker-Jacques’, with all proceeds donated towards the former Guernsey FC footballer’s treatment and recovery.
In total we raised £691.46 at the Club to be donated to Jacques on behalf of the Kings community!
We asked you to become Jacques’ Green Lions for the day and you delivered. Using the hashtag #CrackerJacques, your selfies, group pics and fitness stats from the class created a wave of support online that was warmly received by Jacques.
“Feeling the love and support today from some very special people in Guernsey,” Jacques wrote on his Instagram story.
“Thanks to everyone that attended! Another lift for me.” 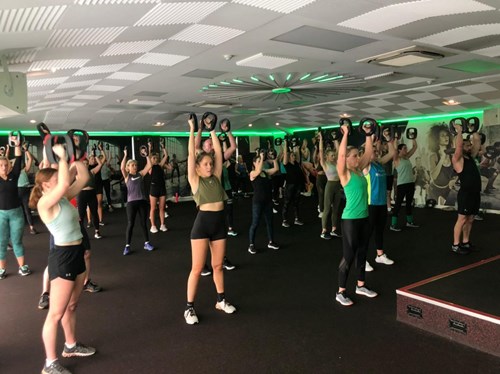 Pictured: Part of the Cracker-Jacques class.
With so many of Jacques’ friends and family at the club, we are using these pics to create an actual wall of support on the club noticeboard opposite the internal club entrance to 1857, which will be in place imminently!
The Cracker-Jacques class was delivered by Jacques’ former teaching colleagues and well-known club instructors Liz Dale and Jacques Isabelle.
“A big thank you from Karl & I for the determination, energy & spirit that the Cracker Jacques team showed on Saturday,” said Liz.
“There really was a fantastic atmosphere in the studio with everyone committed to working up a sweat, pushing themselves & having fun - all for a friend who we wanted to offer our support to.
“There were a lot of very tired bodies for the rest of the weekend…including mine!”
You can still make donations independently through Jacques’ JustGiving page here.
Share this page